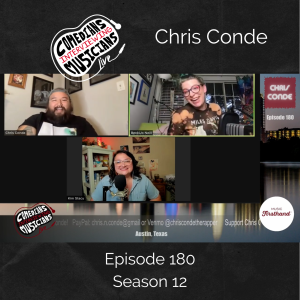 Episode 180- Interviews and performances with the best of Austin's hard-working musicians being interviewed by local comedians. Sometimes strange, sometimes serious, but always sincere. Brought to you by Music Firsthand.

Hosts BeckiJo Neill and Kim Stacy connected with Chris Conde for the Comedian's Interviewing Musicians' Season 12. They chat about moving back to Austin, putting on a compelling live show, Alanis Morissette, dealing with trauma, coming out in the 90s, and writing/recording an album during quarantine . They also played a game called the "Tattoo Quiz"... Plus... great live performances featured throughout!